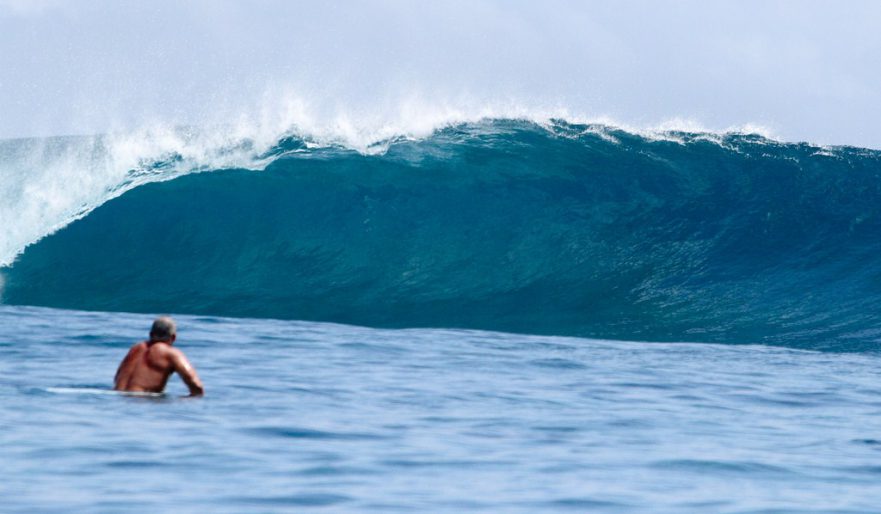 The first time I came to Micronesia my trip started in Kosrae. There I met Ken Miklos. He was the first person to move to Micronesia because of surf and never left. I guess that was sometime in the 80’s.

He told me he came on a sail boat, got the taste of it and later came back by airplane and never left until he took his own life last year. So here is my small tribute to him. The main north wave in Kosrae is a dry, heavy and thick slab he surfed alone for around 15 years. He was also a great host to anyone who came to surf Kosrae and needed a hand and some info about where to go. His son will probably be the first and best surfer Micronesia ever produced. We should meet him in a couple years. So, Ken told me he moved to Kosrae during an El Nino year and all the nice waves and weather he experienced on his first trip were never to be seen during that El Nino season. He told me he thought he was never going to surf again due to the poor conditions. Were those waves he saw on his first trip a rare occurrence? Not really.

Move a good 20 years forward and I had two El Nino winters here. The first one in 2009/10. It was an ok season, not bad, but not the best. The 2015/16 El Nino was like Ken’s first year in Micronesia, the worst season I have experienced here. The best swells were in October, March and April.

What I really remember is what happened after my first El Nino here in 2009/10. A La Nina followed. To myself I though, if this El Nino was just ok, a La Nina might suck. Not really. To this day or my 16 surfing Pohnpei and 12 years living here the La Nina Season was by far the best with almost nonstop swells and excellent winds. I remember the winds were so dead late February I took a crew to surf a sheet glass left on the windward/east side of Pohnpei which we hardly ever do doing that time of the year.

After the worst season it can only get better and I am counting on it.
On the first swells of October our on house photographer Swilly arrives to shoot every turn anyone does on a wave her plus a lot of everyday lifestyle. Mid November the Surf Bunnies/Playmates Sylvi and Janni move in to share a line up with the guests. The sushi, bar and grill will have been up graded. Boats and rooms looking as good as ever and a great season ahead.

La Nina, bring it on!